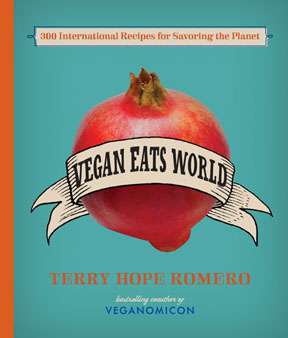 Hold onto your stroopwafels: I’m going to be in Amsterdam next week presenting a series of vegan cooking demonstrations!

If you’re already there (or just visiting like me) please come and see me do my thing, plus pick up a signed copy of Vegan Eats World.

On October 25th Terry will be in Amsterdam for the world premiere of her new cookbook Vegan Eats World. In addition to demonstrating a new recipe from this cookbook, she will give a lecture on veganism and cooking (with a Q&A session), and sign copies of the book, which will be available to purchase on the evening of the event for the special price of €25,- (normal price €34,99).

I’ll also be in Eindhoven earlier in the week presenting another cooking demonstration, more on that to come!

And while I have your attention, if you have any MUST eat or see things I shouldn’t miss, let me know! Truth be told it’s been over a decade since I’ve been on a bike (last time I was in Amsterdam, of course), so an epic ride through the city might not be on the top of the list (at least for now).

This Saturday, talk to me in Tampa!