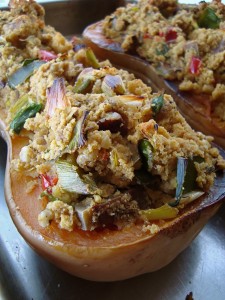 I’m missing Thanksgiving this year. That is I’ll be far away from family and most of my friends and most importantly my kitchen (Paris Vegan Day calls, but more on that when I get back). But that’s not so unusual: most of my Thanksgivings my whole life have involved getting in cars, buses, walking, hiking and most forms of locomotion. So when do I get to cook and eat exactly what I want? Typically just before or after T-Day, with just a modest selection of the big hits; cranberry sauce, roasted Brussels sprouts, a simple salad and stuffing. Gotta have stuffing, for if there’s nothing else about Thanksgiving cooking that arouses foodly passion for every eating persuasion it’s that comforting, carby mash.

Speaking of, make mine cornbread. Molded and baked into that perfect vehicle of a pre-cooked winter squash it’s a filling and gorgeous centerpiece on any vegan Thanksgiving table. This recipe is an old family favorite: being that Thanksgiving isn’t something either of my Venezuelan parents grew up with, it’s a holiday menu we cobbled together, without any established traditions. We made it up as we went along, picking and choosing from what recipes sounded best. I believe this particular cornbread stuffing is based off of an old James Beard recipe, perhaps from a Gourmet from the 80’s. Or maybe not, it’s been in regular rotation for so long it’s impossible to tell.

The original recipe had flourishes of scallions, red bell pepper, sausage–now vegan, of course–and toasted pecans that have remained untouched. This year I’ve enhanced it with more savory seasonings: fennel seed, celery seed (my fave), rubbed sage and chopped leek for that perfectly fall-like oniony kick. The homemade cornbread base really adds something special, so go ahead and make some, even if you choose to veganly modify a mix. Add a chopped red apple to the vegetable saute if you crave additional sweetness, or make it bold with spicy homemade or store-bought chipotle vegan sausage. I used succulent vegan beer brats by Tofurky this time with great, beery success. Cornbread stuffing fix achieved, I’ll try and post one or two more Thanksgiving-style recipes before I’m off across the pond next week. 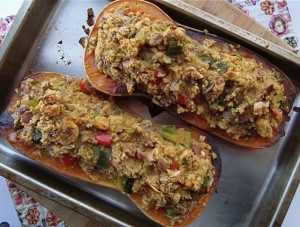 Instead of stuffing into squash this stuffing is equally at home baked in a large 9 x 11 lasagna-type pan. It’s cooked already so the idea is to form a crusty, crunchy top.

In a very large mixing bowl crumble cornbread into small pieces. Dice vegan sausage into small pieces and over medium heat in a large saute with vegetable oil until lightly browned but not overly dry. Remove from pan and add to crumbled cornbread. Melt 2 tablespoons of margarine in the skillet and toasted fennel and celery seeds for 30 seconds, then add diced onion, white part scallions and leek. Stir occasionally and cook until onion is softened, about 8 minutes. Stir in chopped red bell pepper, thyme, sage and cayenne pepper (adjust amount for heat…1/2 teaspoon makes a stuffing with a pleasant, slow burn for spicy food aficionados). Cook for another 5 minutes to soften pepper then add vegetables along with toasted pecans to cornbread mixture.

Heat 2 1/2 cups of vegetable broth (I like to use “chicken” flavored veggie stock in this instance) in a small saucepan over low heat until hot, then stir in remaining 3 tablespoons of margarine to melt. Pour onto stuffing mixture and use a large wooden spoon to thoroughly, completely stir broth to completely moisten the bread. You’ll see what I mean by needing a really big bowl to make this stuffing by now! Stuffing should be very moist but not slopping wet: if too dry dribble in a little more broth at a time and keep stirring. Taste stuffing and adjust seasoning with black pepper and salt if desired. Pour stuffing into prepared pans or firmly pack into roasted squash, mounding and piling on the stuffing. Bake uncovered for 25-30 minutes or until top of stuffing is golden browned. Serve pipping hot!

Uncooked stuffing can be made up to two days in advance, just keep tightly covered and chilled prior to baking.

*Roasting squash for stuffing
For best results you’ll want to pre-cook winter squash prior to stuffing. It’s easy enough to do it the night before assembling the whole thing. In the case of butternut squash split in half, remove seeds, cover cut part with foil and place cut-side down on rimmed baking sheets. Bake in preheated 400 degree oven until it becomes tender enough to easy insert a knife through the skin, but no so tender it’s falling apart. For a large, thick squash that’s about 30-32 minutes. Remove from oven and let cool. Just prior to stuffing scoop out enough roasted flesh (use pureed in muffins) to leave a thick 1 1/2 inch shell (more or less) and rub cut part with a little olive oil and lightly sprinkle with sea salt.

Cornbread for Stuffing
makes one 9 x 11 pan of cornbread

I modified this from the much-made skillet cornbread recipe from Veganomicon. Baked in a 9 x 11 pan it’s certainly thinner but with more surface area it’s crustier and firmer, ideal for making stuffing. Bake it night before stuffing-time and let it sit, uncovered, on the counter to dry out and get a wee bit stale, the ideal texture for soaking up broth for a moist, fluffy stuffing. Tip: I prefer corn flour, a finely milled corn meal, for this finely textured kind of cornbread. But regular corn meal will do just fine here too (just avoid chunky polenta-style meal).

Line a 9 x 11 x 2 inch pan with parchment paper and lightly spray the sides with non-stick cooking spray. Preheat oven to 350 degrees. In a large measuring cup stir together soy milk and apple cider vinegar. In a large mixing bowl combine corn flour, white whole wheat flour, sugar, baking powder, baking soda and salt. Form a well in the center of the mixture and pour in soy milk and canola oil. Stir just enough to moisten the dry ingredients and pour batter into prepared baking pan. Bake for 22-24 minutes until a toothpick inserted into the center of bread comes out clean. Remove from oven and let pan cool on a wire rack. For stuffing let the bread sit out on the counter, uncovered, overnight before making into stuffing.

2010 year of the seitan tamale: Viva Vegan! is VegNew’s Cookbook of the Year

I get my (Top Chef) Just Desserts: Battleship Cake