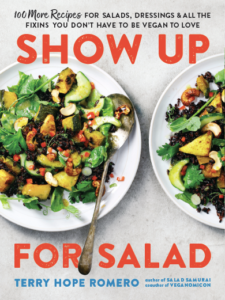 Show Up for Salad
100 More Recipes for Salads, Dressings, and All the Fixins You Don’t Have to Be Vegan to Love
B&N / Amazon

It’s here! My salad cookbook sequel here to rattle your salad spinner this spring. It’s time to Show Up For Salad!

Discover Your Own Salad Adventure: seek out a different kind of salad, and free your salad bowl from the predictable store-bought dressings and same old lettuce combinations. The savory chewy plant-based proteins, “cheesy” toppings without the dairy and endless leafy, veggie, crunchy bready, and fruity options you crave in a hearty, satisfying salad are all right here. 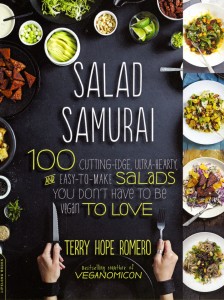 Salad Samurai: 100 Cutting-Edge, Ultra-Hearty, Easy-to-Make Salads You Don’t Have to Be Vegan to Love B&N / Amazon

Discover the Way of the Salad!

Award-winning chef and Veganomicon coauthor Terry Hope Romero knows her veggies. In Salad Samurai, she’s back to teach you the way of the veggie warrior, rescuing salads from their bland, boring reputation and “side” status with more than 100 vibrant, filling entrees. This is your guide to real salad bushido: a hearty base, a zesty dressing, and loads of seriously tasty toppings. Based on whole food ingredients and seasonal produce, these versatile meatless, dairy-free dishes are organized by season for a full year of memorable meals (yes, salad can rock even the coldest days of winter).

With designations for gluten-free and raw-ready options and recipes that are work-friendly, weeknight-ready, high-protein, and loaded with superfoods, Salad Samurai shows you the way of the salad: killer dishes that are satisfying, healthy, and scrumptious. 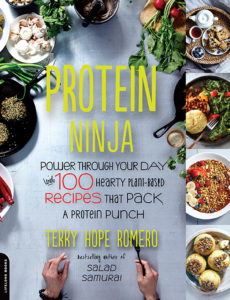 The untrained eye cannot detect the delicate balance of fresh
vegetables, wholesome grains, and plant-based proteins in
your lunch salad or dinner stew.

Chewy egg- and dairy-free brownies or soft chocolate chip
cookies boast the protein content of an egg or a glass of milk.

You’ve left the realm of ordinary weekday vegan eats. Step
into the enclave of The Protein Ninja.

What If the World Was Vegan?

The true building blocks of cuisines across the planet are the spices, herbs, and grains—from basmati rice to buckwheat, coconut to caraway seeds. Apply those flavors to vegan staples such as seitan, or tofu and even straight-up vegetables, and the possibilities? If not endless, pretty darned expansive.

So what if the world was vegan? Your own cooking is the answer to that question; fire up the stove and make a green curry, simmer a seitan date tagine stew, or hold a freshly made corn tortilla piled high with chile-braised jackfruit in your hand. Chart your course in the great, growing map of vegan food history.

Award-winning chef, author of Veganomicon, and author of Viva Vegan Terry Hope Romero continues the vegan food revolution with more than 300 bold, delicious recipes based on international favorites. With chapters devoted to essential basics such as Spice Blends; The Three Protein Amigos; and Pickles, Chutneys & Saucier Sauces, you can make everything from salads to curries, dumplings and desserts. Vegan Eats World will help you map your way through a culinary world tour, whether you want to create a piergoi party or Thai feast, easy Indian chaat lunch or Your International House of Dinner Crepes.

Holidays? Check. Birthdays? Check. Tuesdays? Check! Our research says life is 100% better any day pie is involved. There’s nothing like a rich, gooey slice of apple pie straight from the oven, baked in a perfectly flaky crust, topped with cinnamon-sugar. And now it can be yours, along with dozens more mouthwatering varieties, vegan at last and better than ever.

Vegan Pie in the Sky is the latest force in Isa Chandra Moskowitz and Terry Hope Romero’s baking revolution. You’ll find delicious and adorable pies, tarts, cobblers, cheesecakes and more—all made without dairy, eggs, or animal products. From fruity to chocolaty, nutty to creamy, Vegan Pie in the Sky has the classic flavors you crave. And the recipes are as easy as, well, you know. Serve up some:

Learn how to rock (and roll) the perfect pastry crust, whether butter, graham cracker, chocolate cookie, or gluten-free almond. Luscious toppings transform your pie into a showstopper. And you’ll even find handheld treats, to make getting your recommended daily allowance of pie more convenient! With gorgeous color photos and Isa and Terry’s irreverent commentary throughout, Vegan Pie in the Sky is the modern baker’s bible for pie that’s out of this world.

As coauthor of the phenomenally successful cookbooks Veganomicon and Vegan Cupcakes Take Over the World, Terry Hope Romero has long been one of the most popular vegan chefs around. Now, in her first solo cookbook, Romero opens the world of Latin flavor to vegans and foodies alike. Viva Vegan! expands the palates of anyone looking for a way to add fresh, seasonal ingredients and authentic spice to their meals without relying on animal products. A proud Venezuelan-American, Romero’s enthusiasm for her culture shines through every recipe.

From Publishers Weekly: “While most vegan cookbooks are anemic, underfed volumes-some no-brainer pasta recipes, a few things to do with tofu, maybe some oddball desserts-this slam-bang effort from vegan chefs Moskowitz and Romero (Vegan with a Vengeance) is thorough and robust, making admirable use of every fruit and vegetable under the sun, without once asking readers to make do with fake meat products and egg replacements. Instead, the eccentric authors offer dozens of novel, delicious ways to get excited about eating meat-, dairy- and egg-free.

Take Southwestern Corn Pudding, a winning casserole rich with coconut milk and an unexpected dash of maple syrup-a likely MVP at your next Thanksgiving (whether it’s centered around turkey or tofu).

Almost as addictive are Rustic White Beans and Mushrooms, which get their bite from fresh herbs, and Lentils and Rice with Caramelized Onions and Spiced Pita Crisps, a transcendent Middle Eastern comfort food.

Best of all is the wide selection of terrific desserts: everything from Chewy Oatmeal Raisin Cookies to decadent Caramel-Apple-Spice Cupcakes boldy fill the space where most eggless, milkless and butterless cookbooks fear to tread.”

Vegan cupcakes will take over the world. Better to give in sooner than later and make this a smooth transition. After all, they’re so delicious, easy to make, adorable and portable, these little cuppers are sure to be the beginning of a dairy-free baking revolution.

In this sweet and sassy guide, Terry Hope Romero and Isa Chandra Moskowitz serve up a batch of everyone’s favorite dessert. Vegan Cupcakes Take Over the World unleashes more than 75 recipes for cupcakes and frostings–some innovative, some classics–with beautiful color photographs.

Every single recipe has been tested to perfection, so sneak these ‘cakes into any party and watch them win over the crowd. Indulge in:

You’ll also learn Terry and Isa’s secrets of no-fail baking, inspired decorating, piping like a pro, and shopping for vegan ingredients, plus true cupcake anecdotes from the trenches. When Vegan Cupcakes Take Over the World , no dessert lover can resist!

From Publishers Weekly: “From the authors of the excellent—and cheeky—Vegan Cupcakes Take Over the World comes this winning collection of vegan cookie recipes that should appeal to vegans and nonvegans alike. Without a hint of preachiness, and with plenty of sass, the book delivers veganized versions of traditional cookies such as New York City’s black and white cookies, Pepperidge Farm Milanos (called minonos) and lemon bars, about which the authors explain, â€œFor too long we vegans have had our faces pressed against the glass of the dessert case and longing for the sweet tartness of those shimmering lemon bars. Well, you can stop scaring the staff of that bakery. There are also sophisticated confections like toasted almond cookies with fleur de sel and macadamia lace cookies. While there are cookies that sound suspiciously healthy, such as fruity oaty bars and whole wheat chocolate chip cookies, decadent recipes like caramel pecan bars and starry fudge shortbread, filled with non-dairy chocolate ganache, show that you can be vegan and still indulge in delicious treats.”