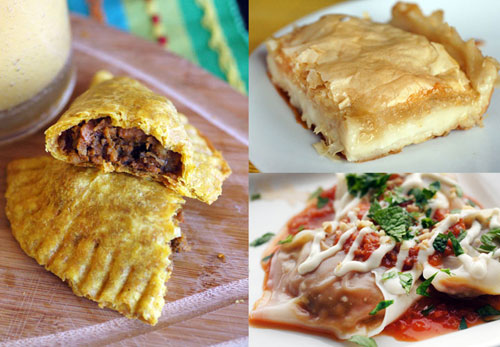 Every single day these past few weeks has been like cooking for a holiday.

But like any holiday feast, it’s me and my dear husband (who’s become a pro at random herb identification thanks to too much emergency grocery shopping) versus a messy kitchen at the end of the day. I feel like I’m reaching a new quota in dirty dishes, doing a fully loaded dishwasher’s worth every evening night. I’m getting a break this weekend only because I’m to be whisked away to attend the wedding of some dear friends in New England. The reception will feature vegan treats, not made by yours truly (but I appreciate the much needed break).

Holiday cooking, just for the sake of the holidays, has taken something of a sideline for me this year. Sure there will be a few cookies, but most of the big projects will have to have to chill. Last year I was making Venezuelan hallacas (big tamales wrapped in banana leaves): as you can see, hallaca making is not a casual task. But holiday cooking should feel different from what you do every day, so I’m cool with that.

But last night after simmering a batch of vegan Ethiopian spiced butter, I gave into a last minute impulse to start on a Caribbean-style fruitcake I’ve been thinking about adapting for years. An article in the New York Times years ago reminded me of the wonderful looking deep, dense cakes I used to see when I frequented the Caribbean markets Flatbush, Brooklyn that dot Church Avenue. Caribbean cakes don’t mess around with frostings or garnishes (I’m not much of a decorator, so I support this), instead focusing on a rich, complex tapestry of flavors and textures.

But you can’t exactly be spontaneous when it comes to fruitcake, especially black fruitcake. As mentioned in the article, some cooks like to marinate their dried fruits in wine and rum and entire year before baking. An entire year! There are few things in life I can imagine planning a year from now, but I suppose a dead-serious fruitcake would be one of those things.

This fruitcake is going to have to settle for a week of forethought; maybe 10 days if I get busy (which is always likely). The fruit in question is a blend of things, some freshly purchased just for cake, some from orphaned pouches of dried fruit found in the pantry. I’ve combined a gorgeous raisin mix from Trader Joe’s (featuring huge golden raisins and dried flame grapes), zante currants, dried cherries, a handful of non-traditional dried cranberries, and prunes. I do have a soft spot for candied citron, so in that went along with some blanched almonds. Then I’ve poured on some vegan port wine and dark rum. For the steeping I’ve packed the fruit into a 1 quart plastic take out container (the kind a big curry comes in), and found there was still a little bit of liquid room to spare, so I added a few more glugs of rum. Its now sealed tight and hanging out with the remaining booze.

If you want to join me in my black cake journey, get your fruit started with me asap. Or start right now and you’ll be totally prepared for next December. I’ll post one more holiday recipe next week (in addition to the cake), my other new vegan tradition on an old family favorite, Venezuelan Christmas (un) Ham bread. 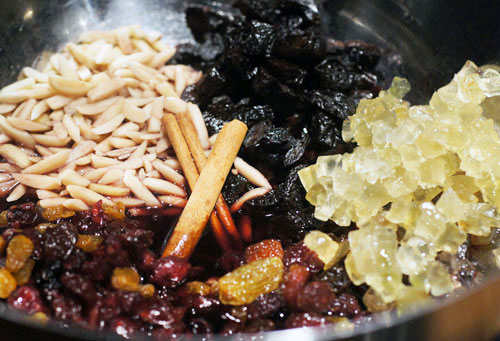 1. Combine all of the ingredients in a mixing bowl. Pack into a 1 quart plastic take out container or 1 quart wide mouth glass jar. If there’s still some space in the container, top with a little more rum as desired.

2. Let steep for 1 week or longer (even a month or more) in a cool dark place.