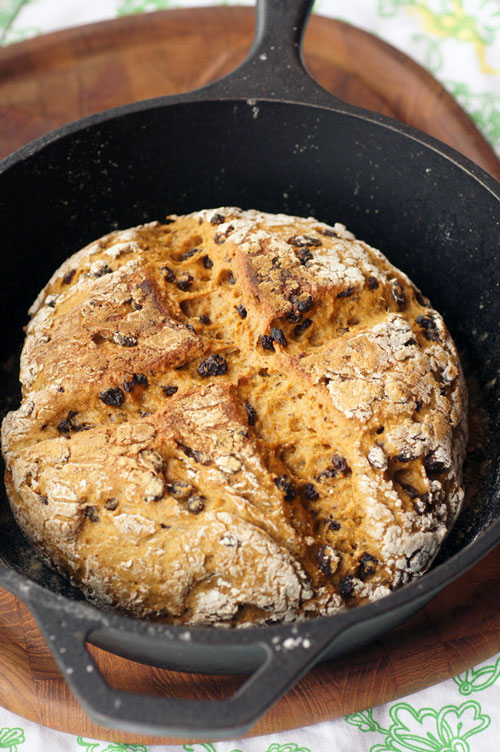 The oven is broken.

For someone for whom a baking session is the equivalent of a relaxing massage or a few hours of Skyrim, I’ve been a little in crisis mode the past month. Month? A whole month without a working oven! I’ve been busy and not home a lot, so repairing the poor dear has fallen to the wayside.

I wanted to present to you an updated version of my favorite twist on soda bread (just in time for March 17th) from Veganomicon, the Whole Wheat Soda Bread with Millet and Currants. It’s a rich, tender bread similar to a scone with the snappy addition of crunchy millet.

I love it. You should make it sometime.

But that’s not in the recipe cards for me. However, I’ve been told that true Irish soda bread is not baked in an oven but over an open fire or stovetop. Very well, I have a fabulous cast iron Dutch oven that I’ve used for countless versions of no-knead bread. Seems entirely feasible to craft old fashioned soda bread (with new fashioned whole grains and vegan adjustments) with a similar set-up, only setting the covered oven on top the oven instead of inside it. 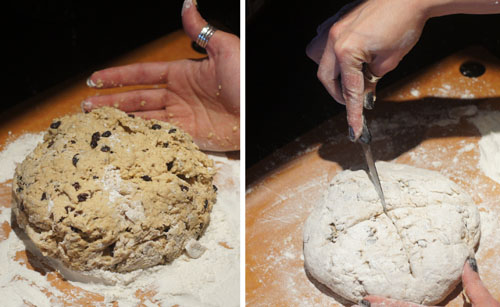 But I did have my reservations: old fashioned soda bread is a lean thing indeed: no added fat, not sugar and only buttermilk (or for me, clabbered soy milk) and baking soda to make it rise. I was skeptical going in, but it made for a fascinating process…and hells bells, the bread rose and baked all the way through. 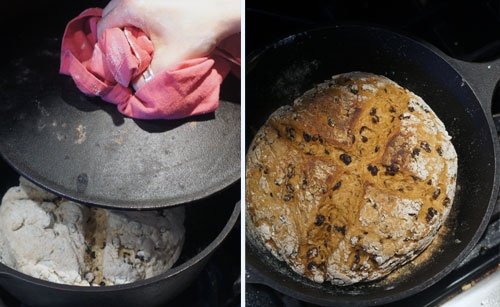 And it’s wonderful. The texture is light and springy, and a crunchy roasted crust forms on the bottom (and slightly on top after flipping) with the aroma of the currants and caraway penetrating though the golden brown crumb. It’s unlike any other quick bread I usually make, and is relatively low maintenance for a stove top treat. I adore currants (or here, affordable faux currants made from Zante grapes) and caraway seeds, but you could leave these out for a very simple loaf.

Here’s a few tips for your stovetop bread adventures:

-This is lean bread without any added fat, so the key to a tender crumb is to just barely mix the dough; over-knead it and the bread can be tough and tasteless. So be careful to stir only enough to moisten everything (some streaks of flour in the dough are fine), drop it into the floured surface and shape immediately into a ball.

-Preheating the Dutch oven is key! Using cast iron is probably the best material for making any stove top bread.

-Being generous with the flour coating. No need to grease the Dutch oven; the coating of flour and the preheated surface will prevent sticking. If you bread sticks, you haven’t preheated the pot enough and you didn’t use enough flour

-For a sweeter bread, try using sweetened milk and adding 2 tablespoons sugar along with the soy/almond milk 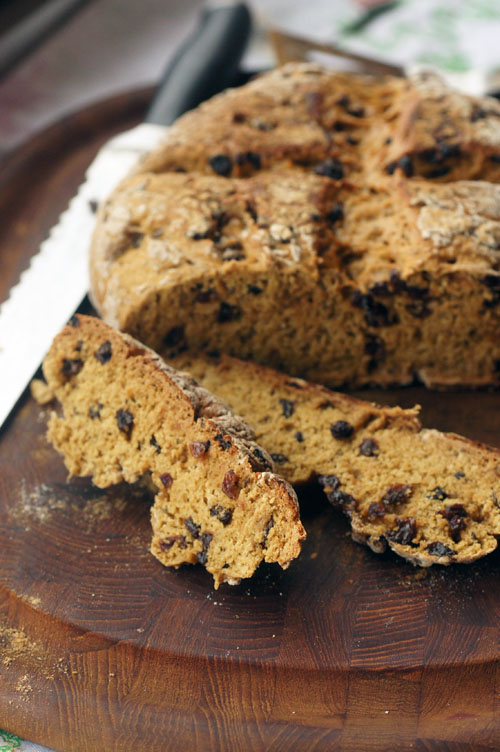 1. Cover cast iron Dutch oven with a lid and preheat over a medium-high flame for at least 15 minutes. If you have a heat diffuser plate, place that underneath the pot.

2. Sift together both flours, baking soda and salt in a large mixing bowl. In a large measuring cup whisk together soy milk and apple cider and set aside to curdle for 2 minutes.

3.   Form a well in the flour, add the curdled soy milk, currants and caraway seeds. Stir only just enough to moisten ingredients. The dough will be slightly sticky, that’s fine…don’t be tempted to add extra flour.

4.   Generously flour a work surface and drop the dough into the flour. Gently pat the dough into a circle, then carefully flip over a few times to coat generously with flour. Pat the sides with a little additional flour.

5.   Use a shape knife to slice a deep X into the top the dough at least 5 inches long (cut deep, about 2 inches deep). Uncover the Dutch oven, lower the dough into the pot and cover. Bake for 20 to 25 minutes until the bread is about doubled in size and feels firm to the touch. Uncover the pot. Use a long handled spatula (and wearing oven mitts to protect your hands!), carefully flip over the bread and bake uncovered another 5 to 10 to minutes to lightly toast the top of the loaf.

6.   Remove the bread, transfer to a cooling rack and cool for 5 minutes before slicing. Serve warm. Wrap leftovers tightly and reheat before serving.

Save the Lamprey Ale & Seitan Pie