Thanks for Brussels sprouts (and vegan pie chats!) 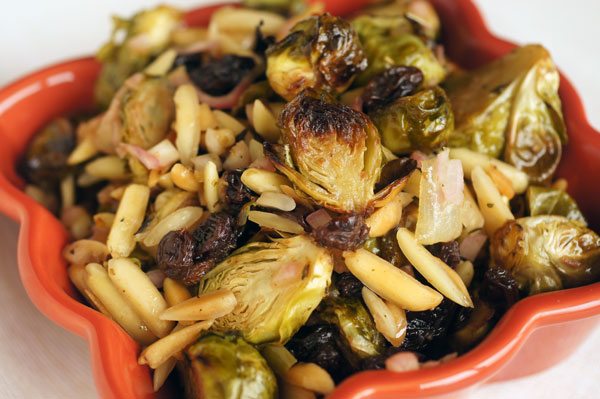 Tonight I’m leaving the city to go upstate to Woodstock Farm Animal Sanctuary to start cooking up their annual ThanksLiving event. Menus, like life and minds and opinions, have a way of changing last minute. The lovely Brussels sprouts salad pictured above won’t be making an appearance this weekend, but we have something else tasty and green to fill that Brussels sprouts shaped hole on 300 dinner plates.

Though this warm and tangy Brussels sprouts salad didn’t make the cut for Sunday’s feast, your own veggie Thanksgiving or weeknight meal will be all the more delicious with it. Roasting is absolutely the only way to go with these teeny cabbage-like morsels; the prep for a pint or two is simply done by slicing, rubbing with a little olive oil and roasting until the outer leaves form toasted. The sweet-tart dressing is made even more lively with the Mediterranean inspired additions of toasted almonds and raisins.

As previously promised, I’ll share a recipe a week from ThanksLiving. I know that I’ll definitely be making these ‘sprouts in November!

One more thing you should know: mark your calendar for 6pm this Tuesday the 18th for Isa and my pie-centric Twitter chat hosted by VegNews. Gearing up for the official release of Vegan Pie in the Sky next week, we’ll be sweet talking you about making amazing, out of this world, totally vegan sweet round things in a crust!

But before dessert, one must relish those veggies…

If you’re using Brussels sprouts fresh off the stalk (aka the medieval vegetable weapon of choice), you’ll have some of those amazing teeny tiny sprouts from the top. Keep those whole as they roast up into perfect little bites.

Preheat oven to 400 and line a large baking sheet with parchment paper. Trim the tough stems from the sprouts, and slice any sprout wider than 1 inch in half. Toss with olive oil, sprinkle with salt, and roast for 25-30 minutes until golden brown. Stir sprouts occasionally to help brown them evenly.