There are few things I should mention:

-I love September in NYC. It’s the best of summer with the promise of fall wrapped up into one. Clear blue skies, forgiving levels of humidity, the first instance of pulling out a light jacket. And I’m looking forward to being reunited with my underused vegan Doc Martens.

-I’ve had my nose to the grindstone wrapped up in the gritty, never-ending last-minute details, but my latest BIG cookbook Vegan Eats World went off to the printers two weeks ago. It’s due to hit the shelves in late October. It’s also undergone some recent huge cosmetic changes, so here she is, the new cover: 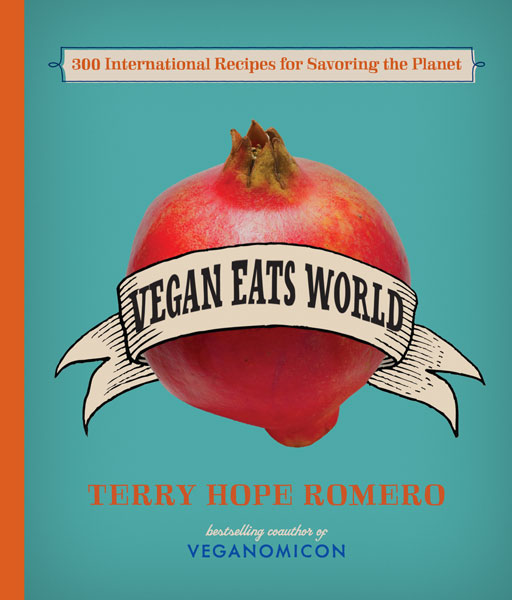 I’m still getting used to it myself (the change was abrupt and heart-stoppingly close to the drop-dead deadline), but a nice writer friend reminded me that the pomegranate has a pleasing global cuisine-spanning feel, as much as a fruit can hope to be. And I do use them liberally in recipes. But there is so much more than pomegranates in these pages! Dumplings, curries, noodles, pickles, banana-stuffed paratha, kale sweet potato fatoosh salad, Italian cashewcotta cheesecake and it goes on and on to all kinds of delicious map points.

You can pre-order at Powell’s, Barnes & Noble and Amazon, to name a few.

I’m traveling all over the place these next few months, so perhaps you’ll see me near you. Which brings me too…

-I’m off to Toronto tomorrow and will be presenting again at their excellent vegetarian food festival! Catch me at Saturday at 6pm demonstrating a quick steamed seitan that’s then marinated and roasted for succulent “gyro” strips. But if you’re there only for Sunday I’ll be co-demonstrating with Isa some vegan pie making! Plus, I’ll excited to judge/rule/preside over Vegan Cupcakes Take Over Toronto, some kind of crazy vegan baking event showcasing what’s what in the local baking scene starting at 4pm. Then off to catch a flight, get home late late, and collapse.

But while I’m there, if there’s any new, exciting, sizzling vegan eats I must try, please let me know!

-And, then, in between more traveling exploits, it will be all too soon before I start up another cookbook. Something smaller, with a tighter focus, and concerning a certain specialty dish we all love. If all goes according to plan I’ll be announcing in early in the new year all the juicy details!