What ever happened to April? May is around the corner but she’s still here, but I’m still playing catch-up with the first half of the month. Worcester Veg Fest was great and it was great to contribute another seitan taco demonstration to their event that hauled in over 2,500 veggie hungry peeps. 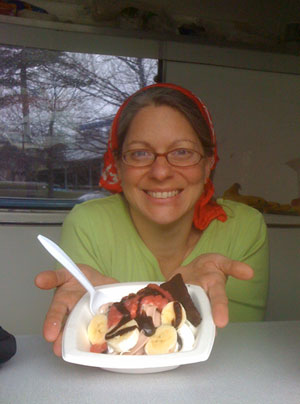 My favorite vegan treat that day was a lunchtime brownie sundae (a limited edition treat, as the brownies were going fast) at Karen Krinksy’s vegan soft serve truck. Lucky you Rhode Island and Massachusetts, looks like you’re going to have one cool vegan summer.

And did you get a chance to watch this totally rockin’ cooking video with Allie and I over at Economy Bites TV? If you’ve been considering the potato chickpea enchiladas in tomatillo sauce from Viva Vegan! but haven’t made the plunge, well here we are holding your hand in the kitchen to make a hearty, tummy-pleasing vegan meal that will fill up your dinner plate tonight and lunch bucket tomorrow.

One adjustment I made for the show is substituting cashews for pine nuts in the crema topping. Pine nuts have never been the most economically-priced item on the old nut shelf, but I suspect lately their prices have continued climbing, so I considered a substitute. Enter the enigmatic raw cashew, which by now has gained top billing in vegan cookery for it’s ability to mimic that essential dairy creaminess post-plumping after a long soak in warm water. It was so good I found myself liking this new cashew-based cream better than the pine nut crema, so going forward I’d recommend saving those pine nuts to leave whole for cookies or sprinkled atop pizza.

It’s been far too long since I’ve post a recipe, so next up will be something savory since I’m currently awash in a sea of pie.

“the meat convention doesn’t have any lines”