Dessert tamales can be unexplored territory for many Latin food fans. But once you’ve been inducted into the club–the steamy world of sweet treats enveloped in sweet corn dough–it’s a membership you’re likely to invoke often. Making a small batch of sweet tamales to end a big tamale fest is a fun way to wrap up (couldn’t resist a tamale pun) a special meal all about the corn husks. And chocolate is always, always invited to the party.

Below is my first experiment with vegan chocolate tamales, made for students from last week’s tamale making class. Well, I’ve never made a non-vegan tamale but this is not the first time I’ve made dessert ones (see Viva Vegan! for more traditional pineapple anise sweeties). I wanted to push the brownie theme so into the dough went melted chocolate. Regarding the filling, there are two options I played with, both rewarding and tasty and one requiring less work on your part. The truffle-style orange ganache filling is smooth and sophisticated, while the sprinkle of chips and toasted nuts fast and toothsome. Either way the dough has ample powdered chili, an absolute necessity when it comes to Mexican-style chocolate consumption (well at least for me).

It’s easy enough to make these days before you plan on serving; just re-steam tamales for 8-10 minutes until the dough is hot and filling melted. Eat them right out of the wrapper, or plate alongside a scoop of coconut vegan ice cream, a drizzle of melted chocolate and a few segments of clementine or strawberries. Chocolate dreams no longer have to be just about cake, there’s room in a corn husk too. 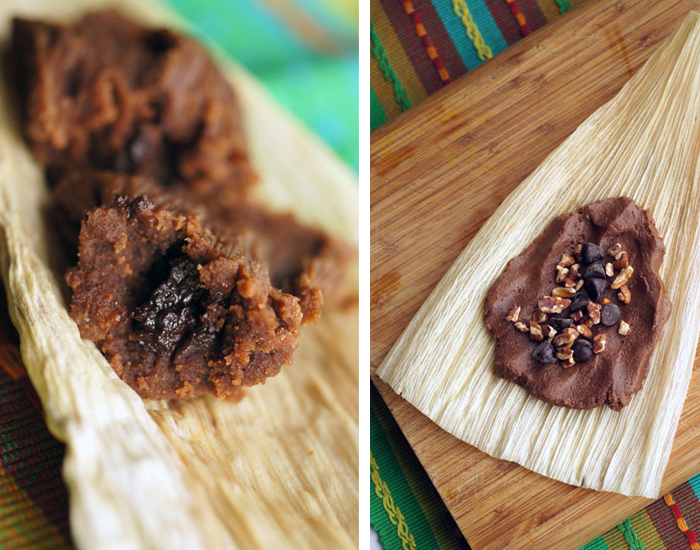 For really fluffy dough use a stand mixer with a paddle attachment, but a powerful, hand held electric mixer does the job too.

2 cups Mexican masa harina flour (DO NOT use corn meal!)

Chocolate Filling, 2 ways (choose one or make a little of both!)

1. Make the ganache filling first if using: in a small saucepan bring the almond milk to a rolling boil over medium heat. Turn off heat and add chocolate chips, margarine, and orange extract. Stir continuously until the chips are melted and the mixture is very smooth. Pop the pan into the refrigerator and let cool until very firm.

2. Prepare the corn husks: place husks in a large container and cover with enough hot water to submerge, pressing down on the husks occasionally. They should soften up in about 20 minutes. When softened, tear a few large large husks into ¼ inch wide strips and keep moist. Line the bottom of the steamer with a few smaller husks.

3. In a large mixing bowl stir together masa harina, cocoa powder, baking powder, cinnamon, chile powder, and salt. Stream in warm water and beat until all the liquid is absorbed and a semi-firm dough forms; cover bowl with plastic wrap and set aside. In a separate bowl cream together margarine and sugar until light and fluffy, about 3-4 minutes, scraping the sides of the bowl with a rubber spatula frequently. Resume beating the masa harina dough, adding spoonfuls of the creamed margarine mixture into the dough. Continue to beat the dough, adding the almond milk one spoonful at a time to create a soft creamy dough. If the dough is too wet beat in one tablespoon of masa at a time, but take care not to make it too crumbly. You can test the dough by dropping a pea-sized bit into water; when it floats it’s ready to use…but I found this usually only happens when I use a stand mixer and rarely a hand mixer. No worries if it’s not though; as long as the dough is not overly sticky and on the fluffy side you should be good.

4. For each tamale spread scoop a rounded 1/4 cup of dough and in the center of a large, soaked corn husk and pat into a oblong shape about ¼ inch thick, leaving bare a least 1 1/2 inches on both sides of the husk. Spread down the middle a heaping teaspoon of ganache filling into the center, or sprinkle 2 teaspoons each chocolate chips and nuts. Grab both edges of the corn husk that are not covered with dough, bring edges toward each other and press the dough to now surround the filling. Gently fold the edges of the corn husks around the tamale so that they overlap. Fold the long top and bottom ends of the tamale on top to form a square or squat rectangular package. Use a corn husk strip to tie the package together in the middle, keeping the long ends of the corn husks down. Repeat with remaining dough, filling and husks. When you’re almost done assembling tamales, get the steaming pot ready.

5. Prepare the pot/steamer basket for steaming. Fill pot with only enough water so that it does not touch the steamer basket, about 2 to 3 inches of water. Cover and bring to a boil. Set tamales standing upright in the corn husk lined basket: don’t pack them in too tight, leave a little bit of room to allow tamales to expand during steaming. Top tamales with any leftover soaked husks and cover pot tightly.

6. Steam tamales for 45 to 55 minutes. Check pot occasionally to make sure that not all of the water has evaporated; add more hot water as needed. Test to see if tamales are ready removing a tamale and peeling back some corn husk; fully cooked tamale dough will be tender but solid, not mushy, and peel back with little effort from the husk. Remove entire basket with lid from pot, place on a dinner plate and let stand for 8 minutes to cool before serving.

Rock down to cupcake avenue