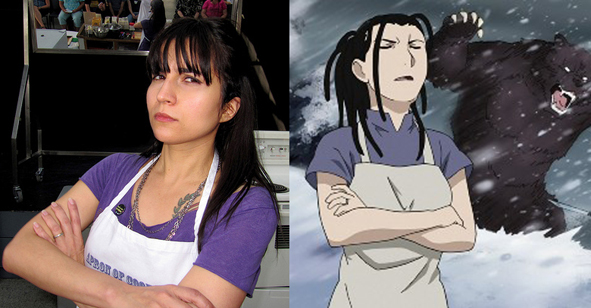 THR at the Toronto Veg Fest, Izumi Curtis recalls a bear fight. Apron required for both.

How long can you stay jet lagged? Well apparently I’ve been for days, recovering from a whirlwind of Portland and Seattle. Vida Vegan Con swept me off my feet and I’m still sorting through the awesome eats and amazing people of the convention and the city of Portland. Not to be all “you should have been there”, but if you love your vegan bloggers as much as I do maybe you should consider getting to the VVC in the future (our intrepid organizers predict a date sometime in 2013, which should give you plenty of time to organize yourself).

Until then, I’ll just have to settle for a speedy post regarding a few things happening in the next few days and weeks. If you’re in the Toronto area or the NYC metro area maybe I’ll be seeing you!

Tomorrow I fly for Toronto, my favorite Canadian city by far; I feel like I can just slid into straight off the plane and never feel like I really left NYC at all, save for some funny money conversions and hopping on the occasional street car (and saying Spadina never gets old, at least for this NYCer).  If you’re a resident or just visiting, come to their amazing, bustling Toronto Vegetarian Festival this weekend, held right by the handsome harborside for all varities of vegan eats, wearables, books, veggie beginner’s information, speakers and demonstrations. Including me, doing not just two food demonstrations but my nutty presentation fresh from VVC about the power of putting more of your story into your blogging. Don’t blog, but have a festering urge to someday? Drop by anyway (it’s free, the whole festival is friggin’ free!) even if you like the idea of putting more focus into your stories…or if you just like pictures of cats and monsters; my slides contain 38% more cats and/or monsters than the leading brand of slide presentation, guaranteed.

If food is what moves you, check out my cooking demonstrations held both Saturday and Sunday: sweet-tooths (sweet-teeth?) get their fix with a faux-dairy free cheesecake recipe ripped straight from the pages of almost-here Vegan Pie in the Sky on Sunday at 2pm. And on Saturday at 2 also I’ll make before your very eyes a savory fall-appropriate pot pie from Viva Vegan!: a tempeh-filled, Chilean-inspired pastel de choclo, literally “corn pie”, but so much tastier than it sounds…think savory tempeh stew flecked with olives topped with a creamy corn pudding top, that’s right.

But if you’re not TO bound this weekend, I’m also hosting a pie baking class at the Brooklyn Kitchen the 14th. We’ll dig deep into the mysteries of using olive oil in pie crusts and I’ll give a demonstration on making the Boston Cream Cake Pie that’s featured right now in the latest issue of VegNews! All class participants will bring home a mini-apple pie with an olive oil crust to bake at home, plus we’ll party down with a slice or two of freshly made pie.

Last but certain not the least…have you ever cooked a meal for 300? Me neither, but I won’t be able to say that after next month’s Woodstock Farm Animal Sanctuary’s annual ThanksLiving feast. No worries, I’m going to have plenty of help and the feast will also feature luscious appetizers by Regal Vegan and Blossom and yumtastic desserts by Vegan Treats. This year’s ThanksLiving is tucked right in the middle of October as not to conflict with any of your actual Thanksgiving travel plans, so do consider coming up, eating down and visiting for the animals. More details to come on the food, but expect a Latin-infused pre-Thanksgiving feast (veggie chorizo flecked cornbread stuffing, sí!), just in case you can’t get enough fall food this time of year.

P.S. the above image was brought to my attention by my friend Ryan, after he saw my TO photo from long ago. It’s been a year since I posed in TO for that photo, and only just a few weeks ago did I get schooled about this image. The lady to your right is one Izumi Curtis from the anime series Full Metal Alchemist; she’s having a flashback about how she went about improving her knife skills. She does this by fighting bears; I do so by fighting beets. Other than that we apparently have similar tastes in purple T’s and aprons. And looking baddass.