A world of vegan Thanksgivings 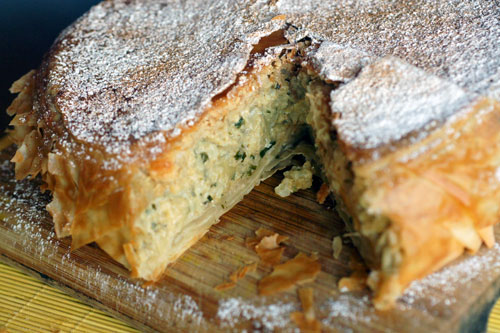 I’m hesitant to suggest entire menus for Thanksgiving. They’re everywhere this time of year in magazine spreads and websites, promising to make this year’s feast special. But really, practically everyone I know who cooks on that day takes a patchwork approach toward menu planning: it’s a hodge-podge childhood favorites (from lasagna to spinach pie) and American tradition merged with contemporary trends (chipotle tequila cranberry sauce anyone?), not to mention catering to an assortment of dietary needs from gluten-free to sugar free to my favorite, vegan.

The most traditional Thanksgiving meal I’ve eaten wasn’t with family in the U.S., but in Paris with friends old and new, a few days before I presented a cooking demonstration at Vegan Paris Day in 2010. On a candle-lit boat docked on the Seine, we savored a dinner by The Gentle Gourmet vegan B&B (I believe currently transitioning to a full service restaurant). It was a comforting plate of nostalgia I never thought I had: seitan mushroom roast (drove in from Germany that morning), herbed cubed bread stuffing, stewed fruit compote and sage gravy followed by pumpkin cheesecake. All the Thanksgivings I’ve ever eaten (pre and post vegan) featured black beans, vegetarian sushi, empanadas, arepas, pierogi in addition to the usual suspects. I love that I had to travel to France to finally get a taste of real Americana, vegan-style.

So in the spirit of whatever traditions fill your holiday table, here are a few suggestions from the pages of Vegan Eats World. These are recipes that feel right at home for any meal from the 22nd of November until January 1st, and well into the new year. I surprise myself sometimes by how many recipes I cranks out inspired by fall flavors; apparently this is my favorite food season of the year. Browse through the index for the page numbers for these beauties:

Bisteeya
This show stopper entree is a huge Moroccan savory pie wrapped in filo dough; mine is stuffed with chickpeas and cauliflower brimming with aromatic spices. I plan on baking up this beauty for Xmas myself. It’s best served warm and let guests carving out big warm chunks for themselves. It’s really a meal on its own, simply served with a kale or carrot salad dressed with lots of lemon and olive oil.

Seitan, Almond and Sesame Tagine
The rich and mellow Moroccan spices reminded so many of my recipe testers of fall. I love this hearty seitan dish loaded with dried fruits, almonds and toasted sesame seeds. Traditionally paired with couscous, it could saddle up beautifully next to a mellow whole wheat bread stuffing.

Rhubarb cranberry chutney
I originally made my first batch two springs ago upon finding a few stalks of rhubarb in my CSA box. Much to my delight another CSA member confessed to me that her Indian mom did exactly the same thing, “it’s sour, so of course she made chutney”. If you can find frozen rhubarb, this red zesty chutney will also make great sandwiches with that leftover nut roast.

Pumpkin Kibbe
This veggie spin on a Middle Eastern favorite is holiday ready! This rich and hearty pumpkin casserole with bulgur wheat and a rich walnut filling is a beautiful centerpiece that serves 6 really hungry folks, or 8 with lots of sides.

Pumpkin churros
Pumpkin pumpkin everywhere! These pretty Latin-style doughnuts are just that. Maybe not so much for the big dinner event, but perhaps a light brunch the next morning.

Tenacious Tart Tatin
Of course you’ve been eating nothing but pumpkin for months now, so sometimes it’s too easy to forget our other autumn dessert darling, pumpkins. Try this rustic French spin on pie, tart with a rich olive oil shortbread crust smothered with deeply caramelized apples.

But of course, if it’s traditional pumpkin pie you crave, you can’t go wrong with our tribute to the best recipe vegan pumpkin pie recipe ever from Vegan Pie in the Sky on The PPK blog right now.

Join me on G+ this Tuesday LIVE