“the meat convention doesn’t have any lines” 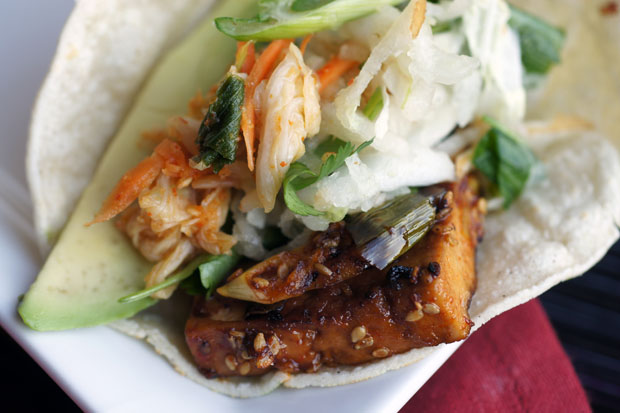 A kimchi tofu taco, one of my many taco obsessions & maybe future demo food!

Epic lines, thousands of attendees wrapped around city blocks, 3 hour wait. Leaning over velvet ropes, beckoning to towering suit-clad bouncers for a chance of bypassing the masses to get in. Just another must-be-seen event in NYC? In this instance it was the very first New York City Vegetarian Food Festival, but in typical New Yorker fashion few were willing to give up their spot for a chance to see veggie city history in the making.

I’ve attended a lot of vegetarian food fairs and that’s brought me to the far reaches and closer corners of Paris, Toronto, rural Pennsylvania, Boston and this year Worcester, then Madison and who knows where next, and in  places visited I’ve been asked why not NYC? Well, I’ve dabbled in a little bit event organizing and suspect much of it had to do with typically New York problems of big costs, little space and sooo many people. But no longer! Our city’s festival was a smashing success if I ever saw one.

However I didn’t get much of a chance to get a sense of the bustling exhibition floor; I started the day with a seitan taco cooking demo, then after my performance as Terry the talking-dancing-cooking wonder I cleared away my mess (with a helping hand from a thoughtful attendee), ran downstairs to introduce a string of speakers including Dr. Neil Barnard and Victoria Moran, and afterwards wrapped up the day with by moderating a panel about transitioning to a healthy vegan diet with vegan chefs Amie Valpone, Yoli Ouiya, and Ayinde Howell. If there was a common thread to all of these packed events it’s that New Yorkers are hungry for vegan information, be it how to make quinoa or what to do when you love tempeh and she or he loves a T-bone steak.

Despite all the action going on inside the venue, one of my favorite moments of the day was when I stole outside for a few minutes to meet my husband. Standing across the street from the lines, watching crowds swarm alongside the Cinnamon Snail vegan snack truck (I still lament not hitting up my favorite New Jersey vegan food “destination”), a pair of bystanders asked us what was the big to-do with the endless line. We chimed in, “it’s a vegetarian food festival”, to which they gaped “really, people would get in line for that?”. They soon followed with “well I bet the meat convention doesn’t have any lines”. So true, you better believe that imaginary meat convention would be line-less; it ain’t got nothin’ on our city’s growing appetite for a veggie way of life .

I’d say that was a perfect way to kick off my veggie convention season; next week I’ll be heading up north to Massachusetts to deliver a double whammy of Terry at The Odyssey Bookshop in South Hadley, Saturday April 16th at 3pm, then Sunday I’ll be presenting at The Worcester VegFest at Worcester State University. I don’t know what time yet, but it’ll be an encore presentation of my famous taco demo. And last but never the least, I’m officially in for the Mad City Vegan Fest in Madison, WI in June! Tacos again? Perhaps! Who knows, if you catch me at all of these places then perhaps someday you can tell your children’s children about seeing Terry sling the seeds of seitan tacos to a vegan taco hungry land.